Because this seems to be a persistent source of confusion, let us begin by stressing that we did not develop the phenomenal algorithm used to generate these faces. The StyleGAN algorithm used to produce these images was developed by Tero Karras, Samuli Laine, and Timo Aila at NVIDIA, based on earlier work by Ian Goodfellow and colleagues on Generative Adversarial Neworks (GANs).

In February 2019, graphics hardware manufacturer NVIDIA released open-source code for their photorealistic face generation software StyleGAN. The software uses a generative adversarial network (GAN) approach, in which two neural networks play a game of cat and mouse, one attempting to generate artificial images indistinguishable from real photographs, the other attempting to tell the difference. The two networks train one another; after a few weeks, the image-creating network can produce images like the fakes on this website. Already faces created by StyleGAN are being used in espionage.

The StyleGAN algorithm synthesizes photorealistic faces such as the examples above. Figure is from Karras et al. (2018).

In addition to the code for the adversarial network system, NVIDIA released the data — in a form of neural network weights — for a full-trained model, so that users could bypass the lengthy training process and begin generating faces right away. During the training process, the GAN needs a set of real faces to learn from; the network provided by NVIDIA was trained on the combined images from combination of two large collections of facial photos, CELEBA-HQ and FFHQ. The former includes thousands of celebrity faces. The latter comprises 70,000 facial photographs posted to Flickr under a creative commons license. All license details are provided in the .json file associated with the dataset. 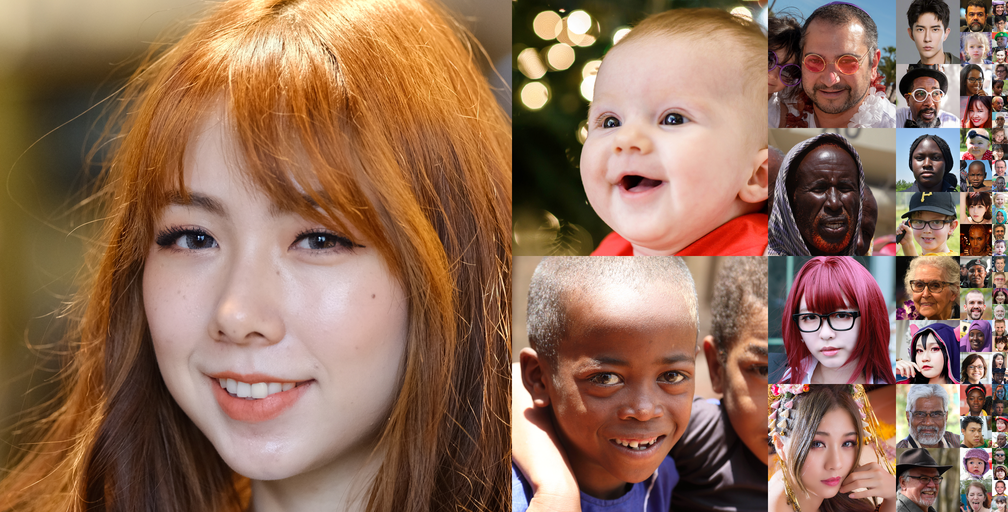 On this website, we present pairs of images: a real one from the FFHQ collection, and a synthetic one, as generated by the StyleGAN system and posted to thispersondoesnotexist.com, a web-based demonstration of the StyleGan system that posts a new artificial image every 2 seconds.